Six to twelve months in advance, the Berlin Philharmonic’s production manager sends us a request for a quote to provide transportation on the guest performance trip to Baden-Baden.

That is when our scheduling team begins its job. When calculating the costs of the tour, the following aspects need to be covered in addition to the deployment of vehicles and personnel: Feasibility of transport between the venues, in terms of driving and rest times for drivers, and related health and safety considerations. We also have to obtain any necessary permits, such as for weekend driving or truck access to some city centres. The orchestra’s production manager receives our quote a maximum of three days after submitting a request. The contract is usually awarded two to three months prior to the tour.

A few weeks before the transport:

The scheduling team assigns the drivers in advance of the tour. All the necessary permits are obtained, and loading staff are assigned to Berlin.

A few days before the transport:

A few days before the transport, our “Beethoven” and “Mozart” rigs are prepared for their grand tour. The trucks are washed and refuelled, and all technical details are checked. Then the transport equipment and ramps are loaded into the swap bodies and trailers. The signage bearing the orchestra’s name is also affixed on the truck sides.

On the day of the transport

The day has arrived. The drivers and loading staff gather at the KANITZ BERLIN depot at 9 pm. The drivers carry out the pre-departure checks and turn on the heaters in the swap bodies.

At 9.30 pm, between two and six drivers head off in their trucks from the depot to the Philharmonie. Our specialist loading team for orchestra transports comprises six to eight people. They follow the trucks to the Philharmonie in a minibus. Once on-site, all vehicles and trailers are brought into position for optimal loading.

First the orchestra stage manager gives a short briefing to our drivers. Then the flight cases are taken out of the Philharmonie via lifts and ramps and loaded into the pre-heated trucks.

It is always fascinating to see how our drivers load the trucks based on their decades of experience. They always follow the same loading sequence.
Each individual case has a number, and a matching “add-on”. The task is to waste as little space as possible.

After about three or four hours the loading process is complete. Some time between 1 and 2 am., the trucks leave the Philharmonie and head off towards Baden-Baden. The loading staff are driven back to the KANITZ BERLIN depot. Their night’s work is done.

From Berlin to Baden-Baden is about 700 km, a distance that can be covered in some 10 hours at an average speed of 70 kilometres per hour.
The truck drivers rotate the driving en route. One driver will drive for about four and a half hours, while his colleague gets some sleep. They then swap over. On arrival at the concert hall in
Baden-Baden, our staff unload the flight cases. The concert hall staff carry the cases onto the stage. When unloading is complete, the trucks drive to the nearest motorway service area so that the drivers can take their daily rest period.

The health and safety of our drivers is our priority, which is why we are always meticulous in ensuring that driving times and rest periods are observed. After the daily rest period, the trucks return to Berlin, or go on to the next job. 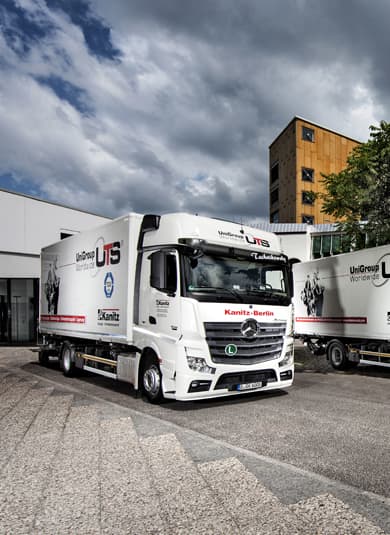 Send us your enquiry, with no obligation.